Cu Chi Tunnels: What I discovered at one of Vietnam’s most famous sites 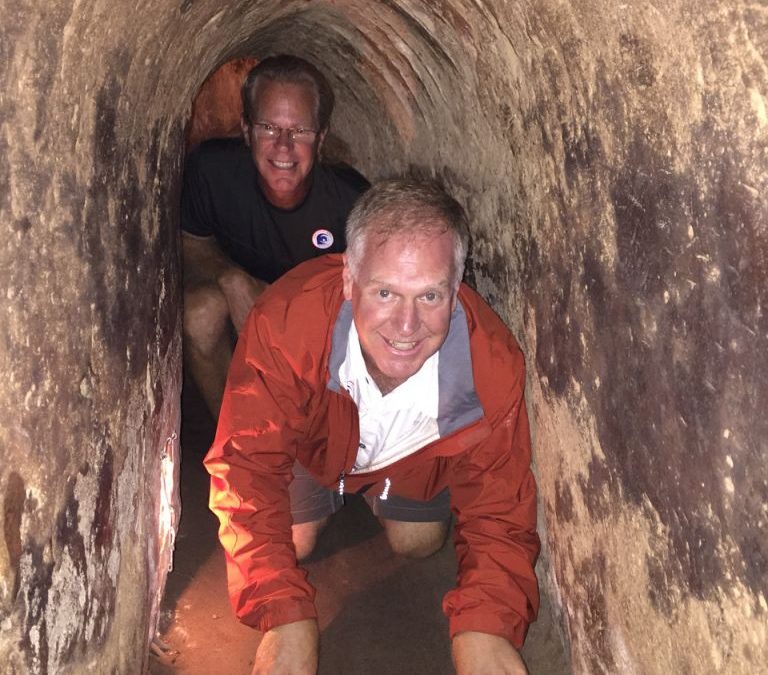 Just outside Ho Chi Minh City is one of Vietnam’s most famous sites–the Cu Chi tunnels.

The labyrinth of underground tunnels northwest of the city were used by the Vietnamese to fight against the French in the 50s. Later the the Viet Cong used the tunnels as they took control of South Vietnam.

Our first stop in the war memorial park involved sitting on plain plank benches and watching an introductory film. Filmed in the 1950s, the old black and white movie outlined the evils of Americans who invaded Vietnam, disrupting its peace.

I was a little taken aback at the forcefulness of it all. And, I admit, a little surprised there wasn’t at least some mention of the South Vietnamese who had resisted Communist control.

“History is a story,” said our guide, “and different stories are told from different perspectives.”

Then I realized that the best way to get the most out of a visit to Cu Chi, was to approach the visit as an invitation to step inside a different perspective, an opportunity to explore a different point of view.

As we walked through the forest of the war memorial park, there were places where you could experience what the fighters might have experienced.

But it was the complexity and vastness of what used to be the tunnels that totally blew me away. (“Used to be” because most of what visitors see are reconstructions of former tunnels).

Leaves and grass camoflauged the entrances. Those who knew where the secret entrances were hidden had to give a password to the person guarding the tunnel.

Le Hong Thanh, a former Vietnamese colonel, was in charge of showing movies in the tunnels. Seven o’clock movie nights in the tunnels were sacred. They were only interrupted by two things: a failed generator or the shots of a B-52 carpet bomber. Up to 100 fighters and their families would pack into a small chamber and watch footage of US antiwar demonstrations and Russian and Chinese films.* Even all those years ago, people realized the power of the media.

I couldn’t help but walk away from my Cu Chi tunnel experience with an admiration for the Vietnamese people. Their difficulties far outweighed anything any of us will ever experience. But in the middle of it, there was incredible ingenuity and resourcefulness.