5 Common Travel Mistakes and How to Avoid Them 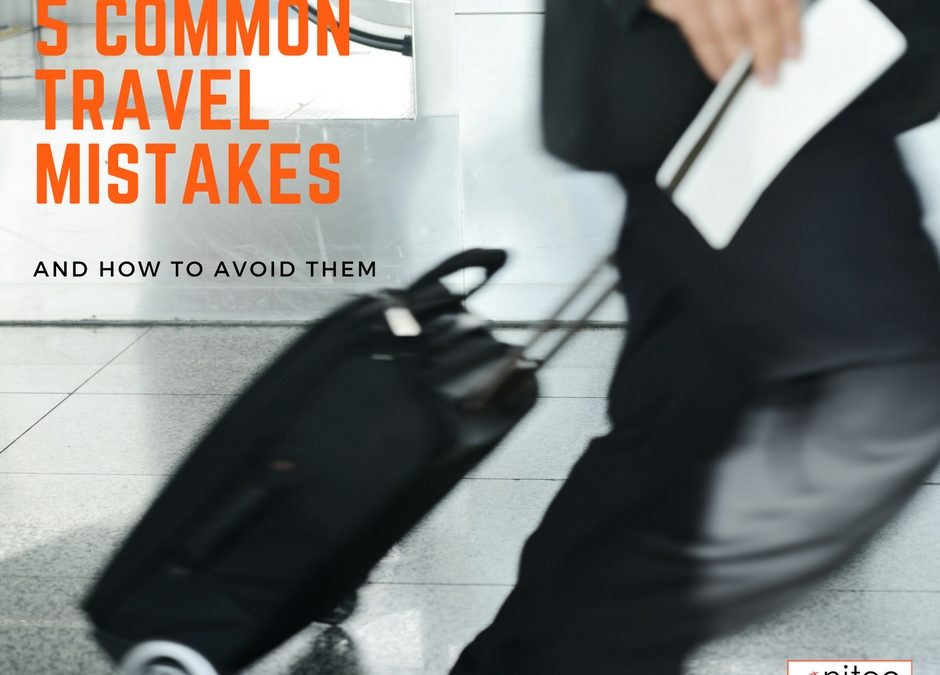 I’m the kind of person who likes to arrive to everything early. My wife not so much. One day Carol was traveling to India via Amsterdam. She arrived in Amsterdam well ahead of her departure time for New Delhi and decided to get something eat in the main terminal. I’ve got plenty of time, she thought.

What she found out later was that getting from the main terminal to her gate was an involved process. She went through three security points and then discovered the gate had changed. Thankfully, she made her flight and now she pads her time—most of the time anyway.

Packing clothes for every occasion might sound like a good idea, but it makes for miserable travel for anyone who has to cart the bag around. There are two types of traveler, says European travel expert Rick Steves, Those who pack light and those who wish they had. And he’s right.

When you pack light, you don’ t have to spend time checking a bag or worry about that checked bag being lost or delayed. It’s quicker and easier to move from place to place without lugging around a heavy suitcase. And in some countries, hotel rooms are small, so you don’t need worry about your suitcase filling up half the room.

Action point: Use the 3:1 clothes guideline and pack everything in a carry-on roller bag.

No matter how well you plan, life happens. Someone gets sick, luggage is lost, bad weather moves in and a plane is delayed, or more serious emergencies come up.

Last year, family members of ours booked a trip. A few months later came an unexpected diagnosis, and they had to cancel their plans. Fortunately they’d purchased travel insurance and all costs were reimbursed.

Having travel insurance is an inexpensive way of adding a little peace of mind in what can be a stressful situation.

Action point: Purchase travel insurance to cover your airfare and other travel expenses, including hotels and any activities you’ve paid for up front.

Travel Mistake #4 – Doing instead of being

Let’s say you’re on tour in Mexico and you’ve got a free afternoon to explore on your own. There’s always the temptation to pack things in and see everything you can in that afternoon. After all, since you’ve traveled all that way, you want to maximize your time, right? But there’s something to be said for simple things like going out for ice cream cone, sitting at a street side café, or going for a late night walk.

I’ve learned there are two advantages to doing this. First, I don’t come home from vacation feeling like I need another vacation. And second, it’s during those down times that I often discover interesting things that make the trip even more worthwhile.

Action point: Build time in your vacation schedule just to be.

Every region of the world has its specialty, whether that’s a local dish, a type of fruit, a sport, or skill. The thing is, the people in that region might not think of it as a specialty. For them it’s just something that’s part of their everyday life. So you’ve got to keep your ears and eyes open to what’s local.

A few months ago, we traveled to Louisiana to discuss a possible tour with a friend. As we drove around, we kept noticing signs for crawfish. So we headed to a small crawfish drive-through shack and told them we were from Minnesota and wondered how things were done in Louisiana.

We walked away with several pounds of salty, spicy crawfish and a hands-on demonstration on how to extract the most meat. They were so good I went back the next day for ten pounds. My buddy and I sat and fished and ate crawfish by the dock all afternoon. Talk about enjoying local.

Action point: Make it a priority to find out what’s authentically local then try it!

What are some travel mistakes you’ve learned to avoid?